Nick Mosby Announcement This Sunday // Fresh Face Jumping Into Crowded Field for Baltimore Mayor: Who Else Is Running?

0
Ending months of speculation, Baltimore City Councilmember Nick Mosby appears ready to jump into the race to become the next Mayor. As reported by The Baltimore Sun, Mosby emailed supporters this morning inviting them to an important announcement taking place Sunday afternoon where they will hear from “the best choice for a better Baltimore.” Below is a hard copy invite that has been circulating for a number of weeks: 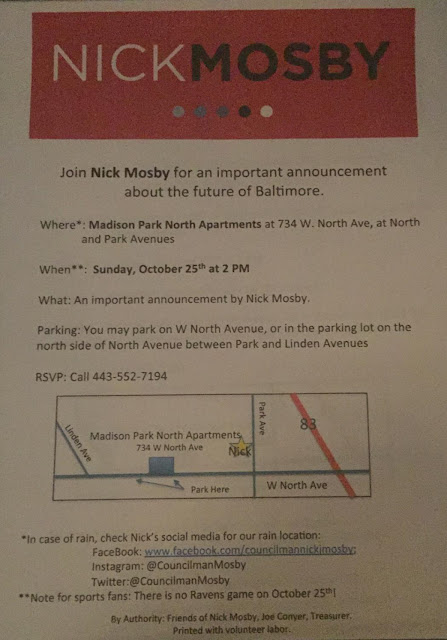 Mosby has been an active and vocal member of the City Council in his first term, helping pass ‘Ban the Box’ legislation, being only 1 of 2 Councilmembers to vote against confirming Kevin Davis as police chief, and constantly pressing the flesh in neighborhoods across the City. He and his wife, State’s Attorney Marilyn Mosby, gained national attention following the protests and unrest set off by the death of Freddie Gray.

Mosby is a client of well-respected fundraiser Colleen Martin-Lauer. Martin-Lauer has also worked for Mayor Rawlings-Blake and Governor O’Malley (among many, many others).

With 175 days until early voting starts in Maryland’s April Democratic primary, Mosby jumps into a crowded field filled with a number of well-known candidates many of who have previously run for the City’s top job. A list of announced and potential candidates is listed below. The winner of the Democratic primary is the heavy favorite to win in November.
Announced

What the Presidential Race Says About the Future of Maryland Politics // Through the Lens of Hillary Clinton vs. Bernie Sanders

Your email address will not be published. Fields marked * are mandatory.